Camera company Panono released its new design today for their unique panoramic camera which will be available in spring 2015. The company and idea started in 2011 with the help of fundraising website indiego, where they raised over 1.25 million dollars from backers and companies. The camera works by tossing it into the air as high as you want, and with high tech sensors, it is able to sense when the ball is at the maximum height, and snaps the 360×360 photo. 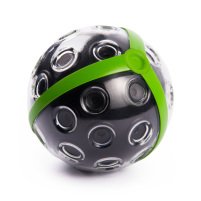 The ball shaped camera has 36 fixed focus cameras that are triggered at the maximum height of your throw and instantly catches a 360 degree picture. Resolution on the camera is quite impressive, with 108 megapixels being the final resolution, it knocks the iPhone 6 plus out of the park by being 13.5 times more powerful. The camera weighs only 440 grams, and has a diemeter of 11cm’s, making it convenient for on the go photography and how high you can than throw it! It connects to any Android or Apple device, Android 4 and iOS7+, using their free app which  makes it easy to view and upload your pictures. You can store up to 400 pictures on the device, and you can also take still photos when you need a more precise shot.

The camera looks like a great new invention for the world of photography, and I will definitely  be eager to try it out when it comes out next year for $549 USD.