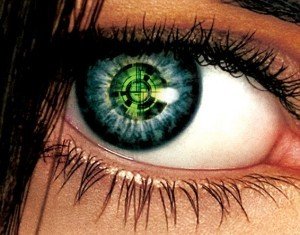 After more than two decades of research and development, the first retinal prosthesis has received European approval for clinical and commercial use. People blinded by degenerative eye disease will have the option of buying an implant that can restore their vision at least partially.

“It marks the beginning of an era in which sight will be restored at ever more astonishing levels,” says Robert Greenberg, president and CEO of Second Sight, the California company that developed the device.

Walter Wrobel, CEO of Retina Implant AG of Reutlingen, Germany, a startup that is carrying out trials of a similar device in several countries, says the approval is an exciting development for hundreds of thousands of people who suffer from diseases like retinitis pigmentosa. 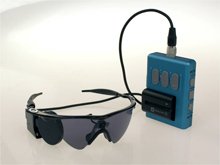 Second Sight’s device, the Argus II, will cost around $115,000 and be available only through a small number of clinics in Switzerland, France, and the U.K. The company hopes to receive approval from the U.S. Food and Drug Administration by next year.

With the Argus II system, a camera mounted on a pair of glasses captures images, and corresponding signals are fed wirelessly to chip implanted near the retina. These signals are sent to an array of implanted electrodes that stimulate retinal cells, producing light in the patient’s field of view. The process works for people with retinitis pigmentosa because the disease damages only the light-sensing photoreceptors, leaving the remaining retinal cells healthy.

So far, the Argus II can restore only limited vision. “Patients can locate and recognize simple objects, see people in front of them, and follow their movement,” says Greenberg. “They can find doors and windows, follow lines, and in the best cases read large print slowly,” he says.

Getting this device to market is an important achievement, says Eberhart Zrenner, director of the Institute for Ophthalmic Research at the University of Tübingen in Germany and founder Retinal Implants AG. “On the other hand, the type of vision the Argus II can provide with 60 electrodes is quite limited,” he says.

Zrenner is developing a device for Retinal Implants that has more than 1,500 electrodes and captures images using light-sensitive photodiodes on the chip within the eye, instead of with an external camera. “It has the light-sensitive photodiodes positioned under the retina right at the place of the degenerated photoreceptors and therefore needs no camera outside,” he says.

Second Sight is also working on larger arrays. But for now, what distinguishes the Argus II from all other devices is its ability to survive long-term implantation in the human body. The Argus II has been tested in trials involving 30 patients. “We have done something that many people would have thought and did think was impossible,” says Greenberg.

Another form of bionic eyes is in development as well from The Boston Retinal Implant Project. Researchers there have been developing a bionic eye implant that could restore the eye sight of people who suffer from age-related blindness. Although the bionic eye will only help individuals that were born with functional eyesight, the implant is expected to considerably improve their lives.

Like the one offered from Second Sight the implant is based on a small chip that is surgically implanted behind the retina, and the users would need to wear special eye glasses containing a tiny battery-powered camera and a transmitter, which would send images to the chip implanted behind the retina. The new device is expected to be quite durable, since the chip is enclosed in a titanium casing, making it both water-proof and corrosion-proof. The researchers estimate that the device will last for at least 10 years inside the eye. 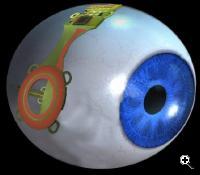 The chip behind the retina.

The scientists explain that the bionic eye will be affective for individuals who once had sight, since their brain knows how to process visual information. The unfortunate people who were born blind do not have the neurological capability to process the data received via the wire. Furthermore, the optic nerve must be at least partly functional. Otherwise, the data will not be fully processed. For many individuals that were born blind, this is a problem as well, since their optic nerve has never been used. However, most of these individuals have a natural compensation mechanism, in the form of enhanced senses, such as hearing and touch.

Although the device will not be able to restore the eye sight of the entire blind community, researchers  are certain many people will benefit from the technology. For instance, age-related macular generation is the leading cause of blindness in the industrialized world, with about 2 million Americans currently suffering from the condition. The new technology will hopefully assist people suffering from this condition, and individuals suffering from retinitis pigmentosa (a genetic condition), but will not help glaucoma patients.

The researchers note the device has some limitations, and it will not restore perfect vision. However, they are sure it will give people the advantage of having a general sense of their surroundings. Hopefully, the technology may enable people to recognize faces and facial expressions. “The thing is to significantly improve the quality of life for blind patients,” said Joseph Rizzo of the Massachusetts Eye and Ear Infirmary, who has co-directed the project with MIT’s John Wyatt since 1988.

This summer, the researchers plan to test the implants on animals. Within the next few years, they hope to start performing human trails. Wyatt says: “What level of achievement that would actually be is hard to know; but the idea is of not having to use the white cane – to walk around, find the sidewalk, avoiding a telephone pole. Being able to navigate safely in an unfamiliar environment, that’s the big topic.”

TFOT has covered the discovery of the last retinal movement-detecting cell and the that has improved our understanding of blindness. Another article recently published by TFOT deals with mind controlled bionic limbs, which were designed to assist disabled people in their daily lives.

Thirty six researchers joined collaborated on The Boston Retinal Implant Project, including scientists from MIT, the Massachusetts Eye and Ear Infirmary, and the V.A. Medical Center in Boston.

For more information about the project, see the Boston Retinal Implant Project website.